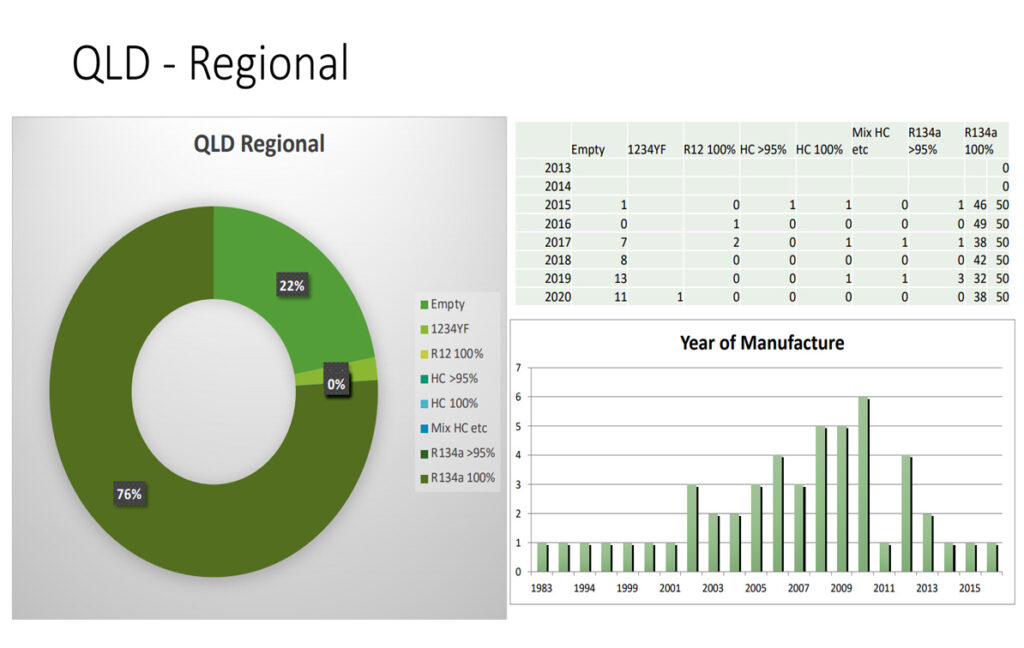 Since 2013, Refrigerant Reclaim Australia has worked with VASA member workshops to conduct regular surveys of which refrigerants are installed in vehicles that are having air-conditioning work done at metropolitan and regional locations around the country.

The study records how many vehicles are charged with R134a, R1234yf, hydrocarbons and mixtures of hydrocarbons with other refrigerants.

The participating workshop in regional Victoria had 28 vehicles come in with a hydrocarbon mix during the survey period, by the far the biggest yet in what has been a bit of an HC hotspot with 17 cases in 2917, 12 in 2018 and nine in 2019.

Regional South Australia had the next highest rate of flammable cocktails during the survey period with eight, the highest number since five were recorded in 2015.

Vehicles with empty (failed or leaky) systems have long been prevalent at participating workshops in both regional Victoria and regional South Australia, suggesting some kind of link between poorly maintained equipment and hydrocarbon use.

Elsewhere, vehicles with full or more than 95 per cent charges of hydrocarbon were scarce, with two in Adelaide and one in Perth.

Amazingly, a handful of vehicles still show up containing a full charge of R12, which was phased out in 1995. Perhaps these cars are true survivors with no leaks or a few cylinders of the ozone-depleting CFC are still out there for servicing old systems.

The vehicles’ year of manufacture is also recorded, with the oldest picked up in this year’s survey being a 1979 model in Melbourne and most other locations working on vehicles from the 1980s.